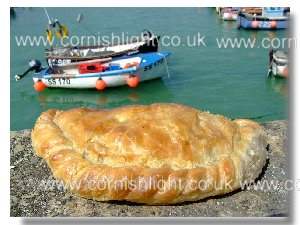 No Cornwall Holiday is complete without sampling a delicious proper Cornish pastie. Whether served piping hot, crisp and golden brown and just out of the oven, or eaten cold as a lunch buffet snack with a sprig of parsley. A way I used to enjoy on cold winter days as a child was wrapped in foil to keep it warm, immediately after being cooked. Never ever served warmed up in a microwave.

For the Pastry ( This is for Shortcrust)

For the pasty filling

The Pastry
Place flour and salt in a bowl, rub in the fat, until the mixture is so fine that it falls through the fingers. Tip mixture onto a lightly floured table top. With your index finger make a well in the centre of the mixture. Add water a little at a time until it forms a pliable but stiff dough.

The Cornish Pasty Filling
Finely chop the steak. Dice the potato, swede and onion. You may prefer to slice them. Add seasoning. Mix all in a bowl or to be really authentic use your kitchen table top.

Using a floured table top roll out half the dough to a circle the size of a plate. Make a mound of the filling in the centre of the dough. Dampen round the edge of the dough with either water, or milk. Fold over the dough, to make a half moon shape, crimping the edges. Make a slit to let out steam. Brush with beaten egg to glaze.

Cooking your Cornish Pasty Place on lightly greased metal baking tray in the middle of a preheated oven, for around 40 minutes at 450 F . The pasty is cooked when their undersides turn brown and crisp.

There is as much folklore around the Cornish Pasty as there are recipe variations. One such tale said it was bad luck for fishermen to take a pasty on board a boat, but then again I know a modern day skipper that 'loves his pasties'.

A very famous photograph from the late Nineteenth Century shows a group of tin miners at 'Croust Time' , that is meal time to you and I, tucking into very large pasties. Incidentally the mining boom was largely over by the 1860's Such pasties would have meat at one end and a fruit filling at the other.

Whatever the truth there is no doubt that the pasty formed an important part of many working Cornishman's diet, be they miners, farmers, or fishermen. With the decline of the mining industry in Cornwall many Cornishmen were forced to emigrate, as far afield as the USA, Australia, New Zealand and South Africa taking the pasty recipe with them.

Though the recipe above uses shortcrust pastry, many people prefer flaky pastry, being lighter on the stomach. My grandmother, a Cornish woman through and through, used to add gravy into the slit of the pasty before cooking.