From Looe to the Rame Peninsula 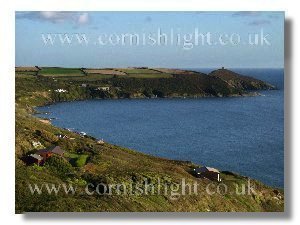 Skirting Millendreath holiday village and private beach the path then winds up the slopes of Bodigga Cliff. Make a detour to the Monkey Sanctuary-see rescued woolly monkeys living as naturally as possible in their own social colony. We found the whole experience captivating.

Seaton with its dark coloured sandy beach, rock pools and stream winding its way to the sea-popular with families. With plenty of car parking behind. In season a restaurant, cafe and a beach gift shop for that forgotten bucket and spade for father and for the kids to pester granny into buying the ice-creams. The valley behind is a country park- wander the paths as they follow the reed beds alongside the river. Continue along the Coastpath to Downderry, the village houses clinging to the cliff slopes, some properties with the most exclusive views of the Bay.

Downderry itself has a long shingle beach but access down a steep slipway or over rocks limits its popularity. Besides a shop the village also has a pub The Inn on the Shore with panoramic views as far as the Eddystone Light 9 miles offshore with a reputation for serving good food. Then up and along Battern Cliffs, more a brush covered steep slope than a cliff-though your legs will have noted its height at over 120 metres above sea level. No wonder many of the walking guides describe walking the Cornish Coast as gruelling but so rewarding.

Portwrinkle, with its small harbour, remaining much as it has for the last few hundred years, the remains of pilchard cellars still clearly visible, though neglected from its days as a pilchard fishing station- the industry declined from the middle of the eighteenth century. There are a few open boats in the shingle. Beyond the harbour is a fine stretch of golden sand, not visible from any road, sheltered from the prevailing winds and a real sun-trap. Parking in the village is difficult. We particular enjoy the fine views of the harbour from the Cornwall Coast Path as you look back over your shoulder from the east. Though the fishermen's and Old Coastguard cottages are now holiday accommodation. Now dominated on the skyline by an hotel with a fine golf and leisure club..

Access to beaches such as Freathy, and Sharrow Bay is often a long walk down grassy slopes or sometimes cliffs, even longer walk on the way back up. Tregantle, provides easier access from the fort road when open, check firing notices.

The wide sweep of Whitsand Bay, 4 miles of beaches at low water, but accessed by a long walk down steep slopes. Popular with surfers. In 2004 the former HMS Scylla was sunk in 20m of water to form Europe's first Artificial Reef already well known as a scuba dive destination. Notice Polhawn Fort now a popular and highly respected venue for civil weddings, like nearby Cawsand Fort built in the in 1860's to protect Plymouth Sound and the Bay from the threat of invasion by Napoleonic forces.

St Michael's Chapel dating from the 14th century but now sadly a ruin sits on the hill at the top of Rame Head. Nearby is the former Coastguard Station. Once a signalling station, passing ships were signalled by flags on the shore, then a Coastguard Station and now run as a lookout by volunteers from the National Coastwatch Institution (NCI), keeping a visual and listening watch.

Inland from the headland, tucked into a slight depression in the landscape is 11th Century Rame Church. Did you know it has no electricity and one of the last remaining hand-pumped organs? Around to Penlee Point, past disused Pier Cellars into the villages of Kingsand and Cawsand.

Visit Kingsand and Cawsand, two small villages only a few minutes walk apart. Once noted for their fishing industries and smuggling. Many of the former fisherman's cottages dating from the 16th and 17th century, now provide Cornwall holiday accommodation. Narrow streets a delight to explore. Notice the Clocktower along Kingsand seafront, commemorating the coronation of King George V ? Cawsand Bay is a popular sheltered deep water anchorage for passing yachts.

Mount Edgcumbe Country Park, visit the magnificent Grade I Cornish gardens and famous historic house. In early spring the National Collection of Camellias in full bloom. Spectacular views over Plymouth Sound. Explore the formal gardens. Created over 200 years ago in the English, French and Italian styles. Take the Cremyll passenger ferry to Plymouth.

Inland visit Sheviock, Millbrook, and St. Germans. Visit Anthony House a superb example of an early 18th-century mansion set in parkland and fine gardens. Fine walks in the surrounding woods and alongside the Lynher River. Not forgetting Torpoint, with views across to the Naval Base.

Beach Safety. Be wary for the presence of rip tides and rocky outcrops, and also of the dangers of being cut off by an incoming tide.