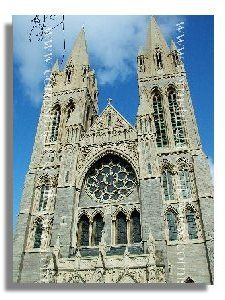 Where the Rivers Truro, Allen and Kenwyn meet, a settlement since prehistoric times. Once guarded over by a Norman Castle, though this is long since demolished and whose site is now occupied by the imposing and multi-architectural award winning Combined Courts Law Building. One of the five County Stannary towns from the Middle Ages, Truro became very prosperous in Cornwall's mining heyday of the 18th century. Many of the town houses and other fine buildings, particularly those on Lemon St date from Georgian times, constructed by very wealthy mineral barons.

Today Truro is still a thriving retail, commercial and cultural centre. Witness Lemon Quay Square- recently redeveloped and attracting prestigious anchor retail tenants such as Marks and Spencer. The square itself has a distinctly lively and continental feel to it, no wonder the locals call it the Piazza. Saturdays often open air farmers market held in the adjacent Tinners Yard. On the east side of the Square the Hall for Cornwall attracts hundreds of thousands of theatre-goers each year to see performances as wide ranging as ballet, to rock and pop to the Royal Shakespeare Company. Down here for Xmas? Don't miss the Fireworks Display on New Years Eve, when the Piazza is packed with happy revellers, some in fancy dress.

Boscawen Street and Lemon Street both largely traffic free, a delightful mix of world class fashion outlets to household named retailers to locally owned shops offering a so friendly and personal service. Lots of places to eat, from fine restaurants to coffee shops and pizza outlets, wine bars to centuries old pubs and inns, some such as the Wig and Pen Inn noted for their fine food.

The Neo Gothic style of Truro Cathedral, with its imposing triple towers and stained glass. Foundation stone laid in 1880, the first cathedral to be constructed on a new site since Salisbury begun in 1222. Funded entirely by public subscription from donors throughout the Duchy. In 1903 the nave was dedicated, and 7 years later with the dedication of the western towers the works were completed.

Take a city centre tour with a Blue Badge Guide, places bookable at the Tourist Information Centre in Boscawen Street. Why not visit the Royal Cornwall Museum ? Cornwalls oldest and most prestigious museum, famed for its internationally important collections. See a myriad of minerals, view their unwrapped mummy, and discover Cornwalls unique culture. Admire the Newlyn School paintings in our Fine and Decorative Arts gallery.

For a delightful one and half mile walk follow the narrow lanes, past Sunny Corner, as they hug the steeply sloping estuary banks to the peaceful creekside village of Malpas, at the narrow confluence of the Truro and Tresillian Rivers. Have a meal and a drink whilst sitting outside enjoying the views from the terrace of the Heron Inn - over the oak clad river banks particularly stunning in autumn when the first gold and browns appear on the leaves, yachts bobbing in the river.

Explore the Fal Estuary by water. Enterprise Boats run daily seasonal pleasure boat trips (depending on the tide from Town Quay, Truro) or from Malpas down river to the Prince of Wales Pier, Falmouth stopping at Trelissick for the garden enthusiasts amongst you, and at the 500 year thatched Smugglers Cottage, Tolverne. Used by the US Army as an embarkation point for the D-Day landings. During the summer months the cottage is open for morning coffee lunches, cream teas and pasty suppers. Trips also to St Mawes and the Roseland Peninsula

Glide past the King Harry Ferry, one of a few remaining working chain ferries in the Country. There has been a ferry working on the site for over five hundred years. In summer the water in many of the creeks is often a deep blue green colour. In winter most of the visiting yachtsman have gone, only the wildlife remain - curlew, oystercatcher, heron, and if you are really lucky, a little egret.

Trelissick Gardens commands panoramic vistas down to Falmouth and the open sea. Extensive parkland, woodland and riverside walks, taking in an Iron Age Fort. Landscaped on many levels, with paths winding down to the waters edge. Occasional views through the oak, beeches and conifers to the creek below.

More Places to See Around and About

Explore Falmouth's narrow streets, some cobbled, alleys leading down to the waters edge. Visit the National Maritime Museum. Opened in 2002. Bringing the World's boats to Cornwall. Reflecting the town's maritime heritage- an eye catching modern building, clad in oak with pitched slated roofs, housing a mesmerising series of exhibits. Take a day trip to the North Cornish coast, explore St Agnes with its mining heritage and great cliff scenery, beaches such as Chapel Porth and Porthtowan.