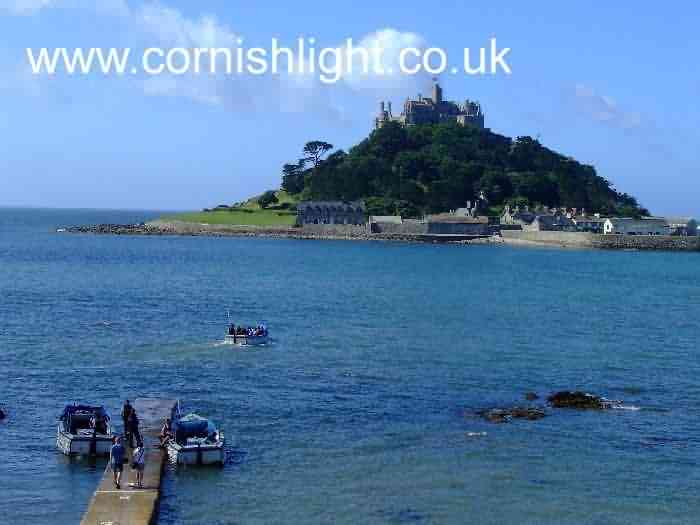 St Michaels Mount Cornwall, former Benedictine Priory and Castle.
The jewel in Cornwall's crown. Home of the St Aubyn family for 300 years. Separated from the town of Marazion and the mainland by a 500 yard long granite causeway, only reachable by boat when the tide is in. One of the most visited National Trust properties in Britain, and open to visitors Mon- Fri during the season.

Beautiful gardens, one of which contains many rare succulents, found growing out of doors nowhere else in Britain, Explore the terrace garden created as recently as 1987. Every room of the Castle is full of history. At one time over 300 people lived and worked on the Island.

Opening Times These are seasonal, so please contact the Mount on 01736 710265 for garden and castle opening times. Castle not open on a Saturday.

The harbour was, until the construction of Penzance Harbour last century, the only safe landing for many miles. The Mount would have been a busy place, with ships bringing in coal and timber and exporting tin. Superb views back to Marazion and the wide sweep of Mounts Bay.

Boat Trips
For a different and enjoyable view of St Michael's Mount take a ferry boat trip around the island at high tide, often with an informed commentary. For example did you know there are 5 wells on the Island? Or that the entrances to the two tunnels were reputed to be used by smugglers?. The boatmen call such trips 'rounders'.

St Michael's Mount- around and About

Overlooking the Island of St Michael's Mount is Marazion, West Cornwall, one of the oldest towns in the Country, dating back to 308BC. Granted a Charter by Elizabeth I in 1595. Old Inns. Lots shops to browse. Marazion Beach being shallow, with miles of sand and lots of car parking is well liked by with families. Mounts Bay is popular with sailors- the red sails of the dinghies adding yet more to the already postcard scene. You may even see the local pilot gig crew out practicing on a Friday evening.

Behind the beach is Marazion Marshes , an RSPB Nature Reserve. Ospreys have sometimes been seen on their migrations too and from Africa At the far end of Mount's Bay is Penzance, a thriving town, and embarkation point for the sub tropical paradise of the Isles of Scilly by boat or helicopter. Beyond that lies the fishing village of Mousehole and the port of Newlyn, home of the second largest fishing fleet in the country not just in West Cornwall.

From Mousehole take the Coastal Footpath West, as far as Lands End if you are keen and fit, taking in Tater Du Lighthouse, unspoilt Penberth Cove Logan Rock and the Minack Theatre. Back on the Mount , on a clear day there are superb views along the South West Coast of Cornwall to the satellite dishes at Goonhilly as far as The Lizard, the most Southerly Point in mainland Britain. West Cornwall offers lots of places to stay, from guesthouses in Newlyn, overlooking the boats bobbing in the harbour, to bed and breakfast St Ives to holiday cottages St Ives Cornwall to hotels such as Housel Bay, to farm accommodation on The Lizard. Holiday Brochures.