Game Fishing in Cornwall
Gamefishing for Salmon, and Trout fishing on the Rivers Camel and Fowey. 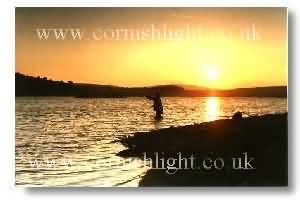 More properly called gamefishing, using either the fly or spinner, and never purists say the worm. Several of Cornwall rivers boast runs of salmon and sea trout, The most notable being the Rivers Camel and Fowey and their tributaries, the Lyner and the Inney, a tributary of the River Tamar. An Anglers delight.

The Cornish rod caught record for a salmon is getting on for 30lb, but 10lb is nearer the norm. Seatrout around 4lb are commonly caught, but again can reach 10lb. Though there is a Spring run of salmon the months from October to December see the greatest numbers of returning salmon, not just at every spate of freshwater but at every high tide too. The Salmon spawn between January and March. Day tickets for both salmon and trout are available, not just to fish on stretches or beats leased to the Local Angling Clubs but to fish on such famous fisheries as Butterwell on the Camel. Where the owners will be delighted to help if your looking for fishing tips to catch trout.
There is also a healthy population of wild brown trout to be found in many of the streams, and grayling in the faster flowing rivers, such as the Inney.

The most well known trout fishing Cornwall is that offered on South West Water's man-made Lakes. Some are in really beautiful surroundings. For instance, Argal near Falmouth, nestles in a wooded valley, and is a superb stocked rainbow trout fishery. There are nice walks through the woods.

Siblyback Lake on the southern edge of the Moor, near Liskeard, is semi natural too but stocked with rainbow trout. It is fly only, and a popular watersports centre too as can be seen in these photos

Roadford Lake just over the County border,in Devon, though stocked when first impounded, is a semi natural fishery holding brown trout up to 10lb.

There are a few privately owned waters too. Temple Trout Fishery, Bodmin, two lakes in a beautiful location on Bodmin Moor of 2.7 and 4.5 acres holding stocked Rainbow, and Brown Trout Averaging 2lb, though club record is well over 10lb .