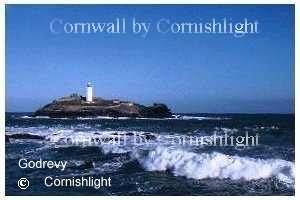 The North Coast of Cornwall from Perranporth to St Ives offers nice coastal walks as well as miles of golden beaches. . Perranporth itself is now a popular Cornwall holiday tourist destination, with several holiday centres nearby. And a wide expanse of beach in Perran Bay stretching north towards Penhale Point Off the Point are the Natural Arch, perhaps Perranporth most famous landmark, and Chapel Rock. Droskyn Point, on a sunny day, is a nice place to sit and watch the body boarders enjoy the waves.

Perrans Bay is reputed to be the landing place of St Piran, the patron saint of Cornish Tinners. His Oratory is buried within the sand dunes, and should you intend to take a rewarding walk intending to see it, very difficult indeed to find.

The Cornwall Coast offers nice walks. North beyond Penhale Point are yet more wide expanses of sandy beach. such as Holywell Bay, with the resort of Newquay, with its surf beaches across the Gannel Estuary. NB much of Penhale Point and the Sanddunes are an Army Training Camp, so keep to the paths.

South past Cligga Point, Hanover Cove , where the wreck of the Hanover lies, with most of the treasure reputedly onboard still not recovered, despite recent attempts. Onto Trevaunance Cove and St Agnes, beyond which lies St Agnes Head and Walking in Cornwall at its best.

Wheal Coates winding house one of the most photographed in Cornwall, ablaze of purple heather and golden gorse in late summer, high on a cliff half a mile north up the Coastal Path from the Car Park at Chapel Porth on the North Coast of Cornwall , a beach popular with both surfers and families alike with miles of sand at low water. Porthtowan Sheep Rock Portreath- the Mineral Tramways. Portreath peaceful today, with a few pleasure boats bobbing in the harbour, holidaymakers enjoying the summer sunshine on the beach. A hundred and sixty years ago, the scene would have been far different. Wagons loaded with copper ore would descend the granite inclines to be loaded into Welsh coasters waiting in the harbour for the journey across the Bristol Channel to the smelters of the Swansea valley. Now many of the Mineral Tramways have been turned into popular off road cycle routes, one the Coast to Coast, crosses the spine of the county 11 miles to Devoran on the south cornish coast. Head west from the habour up Lighthouse Hill, passing the obviously named Pepperpot, actually a daymark, for far reaching views down the coast. Ralph's Cupboard Bassets Cove North Cliffs Reskajeage Downs B3301 Hells Mouth offers stunning views. The cafe has the most mouth watering all day breakfasts too. Difficult to reach but beautiful Fishing Cove.

Navax Point with Godrevy Lighthouse off shore. May be lucky on a Summers Evening to see porpoises enjoying the dangerous tidal currents that sweep around the headland. Gwithian Towans, Red River, named due to the tin residues, from the tin mines around Reduth and Camborne. With the closure of South Crofty a few years ago to the eye running clear, though in fact still heavily contaminated. The whole valley now supports much wildlife. Though still called the 'Sandpit' by the locals, now (since 2005) a local nature reserve, called St. Gothian Sands. Where the red River enters the sea a colony of sand martins has their breeding home in the dunes. St Ives Bay and Hayle Towans. Porth Kidney Sands