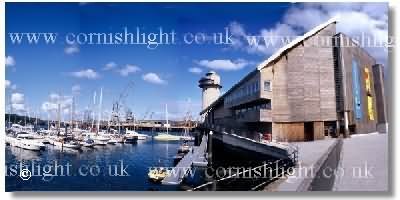 Welcome to The National Maritime Museum Cornwall. Opened on 4th December 2002. Bringing the World's boats to Cornwall. A Centrepiece Development on Falmouth's Historic Waterfront. Reflecting the towns maritime heritage an eye-catching modern building, clad in oak with pitched slated roofs, housing a mesmerising series of exhibits of all things boating, from galleries, to audio visual displays all over looking the Harbour. Already visited by thousands of enthusiastic people heaping praise on Cornwall's newest Attraction.

The Galleries Once inside the building, your tour proper commences with the Set Sail Gallery. A series of model ships suspended in a glass case, lit such that they appear to float on a black star less sea. Another gallery, the Robertson Packet Ship Gallery brings the Story of the famous Packet ships to life before the arrival of steam and the electric telegraph in the 1850's ended the 150 year long glory days of sail. Begun in 1688 when the Post Office chose the Port to be its Westward Packet Station. To and from destinations as far afield as Coruna in Spain, Barbados and Antigua in the West Indies, Mexico, and South Carolina in the Colonies.

Did you know that the Hanover Packet Ship returning to port from Lisbon with a cargo of canons and gold bullion in the form of moidres (gold coins) was caught in a violent storm and dashed against rock near St Agnes in December 1763? Despite several salvage attempts only parts of the bullion has been recovered

The largest gallery in the National Maritime Museum Falmouth Cornwall is the Flotilla Gallery housing historic and contemporary craft from the National Small Boats Collection. Read about the Bluebottle and its Royal connections, on permanent loan to the Museum. Boatbuilding. Learn about the restoration of the Daisy Belle, built in the 1890's using pitched oak now being restored to its original lug and mizzen rig, or maybe the Shrinkle a punt also being restored. Explore the Cornish Quayside, brought to life in an evocative display of old sepia photographs and exhibits. Images of fish wives picking over fish, crab fishermen clearing their pots. Old sail making tools. Like the views in the harbour the intention is to change the exhibits at least once a year.

Climb the spiral staircase of the Tower to the Lookout for great views to the Marina and along the Waterfront to Customs House Quay and beyond. Go down to the Tidal Zone where huge sheets of glass 5m high reach from floor to ceiling keep the sea out, providing as the tide ebbs and flows an ever changing probably murky view of life underwater. Look up, do you see the keels of the boats? Have a bite to eat in the Cafe- enjoying the ever changing views across Carrick Roads, maybe a visiting cruise liner moored in the Docks next door. ?

Events Square. Outside the entrance to the Museum is Events Square a cobbled piazza, surrounded by shops and places to eat. Walk the Promenade along the Waterfront to the Historic town centre.