Falmouth Cornwall Sailing and yachting capital of the County

Falmouth at the mouth of Carrick Roads, the 3rd largest natural harbour in the World. 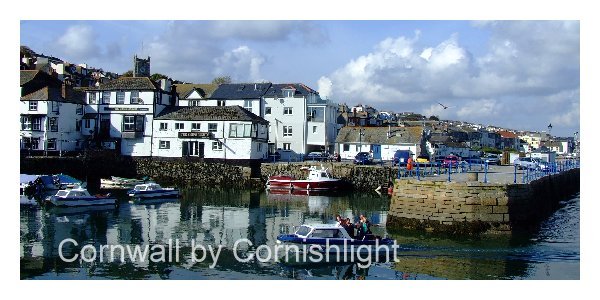 Falmouth Cornwall A bustling friendly place. Surrounded by a beautiful Coastline With many wooded creeks and inlets to explore. Falmouth's heyday began in the 17th & 18th centuries when fast Post Office Packet sailing boats carried mail, and expensive cargo to and from places as far afield as the East Indies and Spain. Nowadays, though Falmouth is still an important ship repair centre, the town is largely dependant upon tourism.

Narrow streets, some cobbled, alleys leading down to the waters edge. Overlooking Customs House Quay the Customs House with its columnaded facade. The quaintly named Kings Pipe. Falmouth has a wide selection of shops, many of whom have a nautical theme- from antique shops to second hand booksellers, to yachting outfitters to boutiques. Many centuries old inns. Art galleries too. In a prime position on Falmouth's harbourside, is the Greenbank Hotel, originally an old coaching inn, where Kenneth Grahame developed his story the 'Wind in the Willows'. On the seafront, overlooked by Pendennis Castle, are several fine such as The Royal Duchy Falmouth's only 4 star hotel.

In Tudor times Henry VIII fearing invasion ordered two Castles to be built to guard the harbour entrance, forming part of his South Coast defences. On the west side Pendennis and St Mawes Castle on the east side. During the First World War a Garrison was stationed at the former, During WWII it housed a secret underground base. Both Castles are well preserved and are well worth a visit. To reach Pendennis Castle follow Castle Drive around Pendennis Point from the Town. The Drive offers great views down into Falmouth Docks, and across Carrick Roads to St Anthony Light and the Roseland Peninsula. Little Dennis Blockhouse, nestling under the Castle. You are likely to see vessels ranging from cross channel ferries undergoing repair, to container ships, perhaps even a gas drilling rig sheltering in the harbour until storms at sea die down.

Sailing and Yachting around Falmouth

Being sheltered from the prevailing south westerly winds the River Fal is a haven for yachtsmen. The port comes alive during Falmouth Week- the annual sailing and yachting regatta week. Working Boats. During the Winter months the Falmouth working boats with their distinctive red sails can often still be seen dredging for oysters under sail alone, as they have done for centuries.

In season take a pleasure boat trip, past Falmouth Docks, and Black Rock with views to the Castle, then back up the river, past the marina's on to Restronguet Creek and Mylor as far as Truro tides permitting. Admire the 500 year thatched Smugglers Cottage at Tolverne, used by the US Army as an embarkation point for the D-Day landings. Vessels such as the Cornish Belle run several daily excursions in season. In summer the water in many of the creeks is a deep blue green colour. In winter most of the visiting yachtsman have gone, only the wildlife remain - curlew, oystercatcher, heron, if you are really lucky, a little egret.

Park and Float - Park away from Falmouth town centre and take a picturesque 20-minute boat trip along the Penryn River to the National Maritime Museum and the town centre. Operates in the summer months only.

For many years merchant ships and even oil rigs were laid up in the River Fal's Upper Reaches. With the upturn in the World economy in the late 1990's they were gone, only for other vessels to return in this new Millenuim.. Good views of them could be had from Tolverne and King Harry Ferry. There is also a seasonal foot ferry to St Mawes.

Around and about Falmouth

Along the Coast towards the mouth of the Helford, are Swanpool and Gyllyngvase beaches, and numerous Falmouth hotels all offering a high standard of accommodation. Continue West and you reach the very unspoilt Helford River, with yet more creeks and inlets to explore. Gardens such as Trebah with its tree ferns and the National Trust owned Glendurgan. Beyond that lies the Helford River and the Lizard Peninsula .