Cape Cornwall along the coast from Lands End, one of only two capes in the UK.

Cape Cornwall. Just up the coast from Lands End, one of only two capes in the UK. The other being 850 miles away - Cape Wrath in Scotland. One of the most westerly points in England with fair reaching views- a very evocative spot indeed. Where the waters of the Irish Sea meet those of the English Channel- witness the strong currents around the headland. 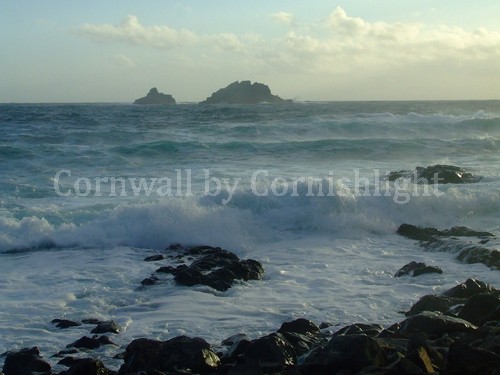 One mile offshore are the Brisons, two small islands (storm lashed rocks in winter), from which an annual swim back to the shore at Priests Cove takes place- the record is just over 20 minutes. Entry is limited because a boat is required to take you out for the swim back- so strictly for locals only, even if you can find the date of this year's event advertised. 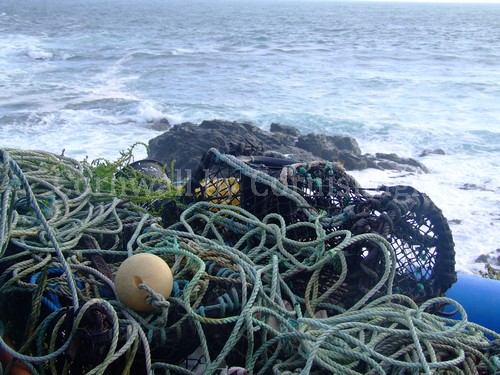 In summer men still take to sea from the cove on open boats, landing lobsters from pots much as they have done for centuries. In late autumn all the pots are lifted, and stored in the fishermens huts dotting the Cove. So atmospheric. The unusual egg shaped boulders make the beach a site of special scientific interest, do not even think about removing them, doing so if caught will get you a criminal record.

Much of the headland that is Cape Cornwall is now cared for the Nation by the National Trust thanks to a gift in 1987 marking their centenary by the H J Heinz company. Even the golf course is actually on Trust owned land.

Looking inland the imposing granite house on the hill top was built by Captain Francis Oats, born in St Just, worked down a local mine at the age of 12, then emigrated and later became the Chairman of the South African mining company De Beers. In 1987 H J Heinz acquired the Cape and donated it to the National Trust.

Climb to the summit of the Cape Cornwall headland- dominated by the brick chimney stack built in 1850 for the Mine of the same name. (The mine was later to become part of St Just United Mine.) A very evocative photograph dating from the 1860's shows two engine houses, and the count house, even a smiths shop and boiler house. All that remains today are the ornate stack and the count house. The mine was last worked in the late 19th century. The whole area has been extensively worked, adits open onto the shore, shafts are often unfenced, so take great care and keep to marked paths.

The ruin in the field on the headland is St Helens Oratory, Grade II listed and dating from the first century AD. Notice the ancient granite cross on the gable?

On a clear day the headland offers far reaching views to Lands End, the Longships and the Isles of Scilly. The snack van in the car park must provide one of the best cups of tea in Cornwall- and certainly some of the best views- even if you just sit in your vehicle. 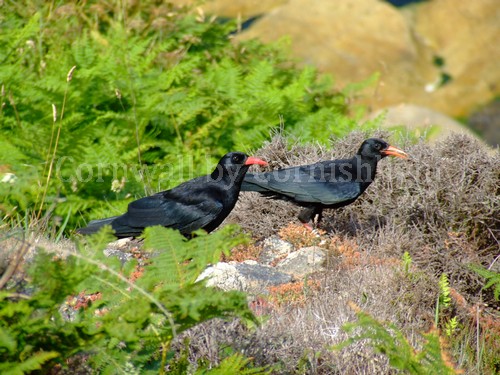 Maybe hear the distinctive call and see the wheeling flight of the Cornish Chough. A pair has nested in a nearby valley for several years now. Take heed of the beware nesting birds warning signs. Offshore gannets often dive into the waters around the Brisons, maybe a seal bobbing offshore- particularly to the east of the headland. Like Pendeen Light a very good spot for sea watching and a spot of viz mig. Below the summit of the Cape, and not visible from the car park, is a former coastguard lookout now manned by volunteers from National Coastwatch.

Walk north east along the Cornwall Coast Path to the Kenidjack valley and explore the remains of the castle- an iron-age cliff fort - on an headland with equally far reaching views. A hundred and fifty years ago the valley was dominated by mining activity- the stream diverted into leats turning several large waterwheels, until the arrival of steam, providing power for ore crushing mills. Continue onto Wheal Owles and Botallack, whose two engine houses clinging to the cliffs must surely be the most photographed in Cornwall? Head west towards Sennen Cove and Lands End, stopping at Carn Gloose to enjoy the views.