Birdwatching in Cornwall, from the Cornish chough to winter migrants to the now recovering peregrine falcon. 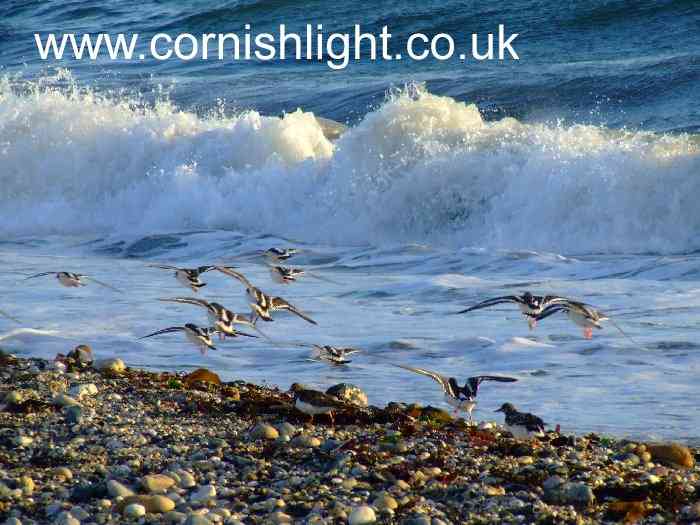 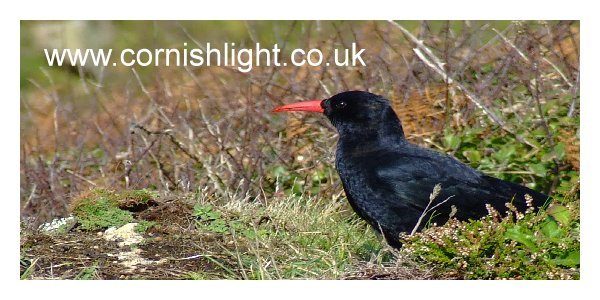 The Chough has made a welcome return to Cornwall, with the first pair breeding successfully in the wild in 2002 in a sea cave near Southerly Point on The Lizard - (for the last few years a pair has preferred a less visible nesting site nearby). It is an absolute delight to see this bird wheeling and diving as they fly along the cliffs and fields of the Cornwall Coast, let all us hope they all manage to breed again this year. In season the volunteers provide a 24 hour presence around the Lizard nest site. During daylight hours an RSPB warden is usually happy to answer your questions by the Lookout Cafe by the Car Park. The cafe itself is a must visit for its mouth watering food, particularly its cream teas. Young birds are now ranging further along the coast and have been seen as far west as the Minack Theatre and Lands End. In 2007 offspring from the first breeding pair successfully raised a brood of their own. In 2009 the first of several pairs bred on the north coast for the first time. Sadly of each brood of youngsters less than half reach maturity. Happily numbers are increasing, in 2016 eight pairs fledged 23 chicks- though in 2017 the number fledging was reduced. Let us hope these offspring breed when adults and their range continues to spread.

Another particularly good spot to see choughs is Cape Cornwall, especially in the autumn when whole broods get together. It has not been unknown to see up to 14 birds in one group, did you know such a gathering is called a chattering? 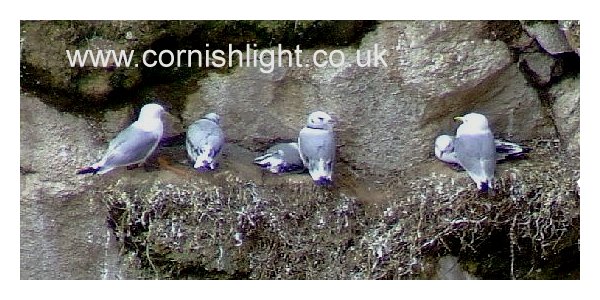 Up to a dozen colonies of kittiwake choose to breed on the precipitous Cornish Cliffs each year. Returning in February or March, to build a nest of grass and seaweed, mixed together with mud and clay, on a ledge or a crevice. A single clutch is laid in late May or early June. One of the easiest colonies to view used to be that under the suspension bridge at Lands End, however with recent cliff rock falls most of the nesting ledges have gone. One of the best known is the colony under the Huer's Hut at Newquay, again only really visible from a boat trip out of the harbour. There is another colony to the west of the Hut visible from the coast path. In the stiff Atlantic breezes the birds almost appear to hover motionless. They have a most beautiful 'child-like' call, and are most charming to watch. Above the former colony at Lands End is an RSPB Hide with lots of birding information. 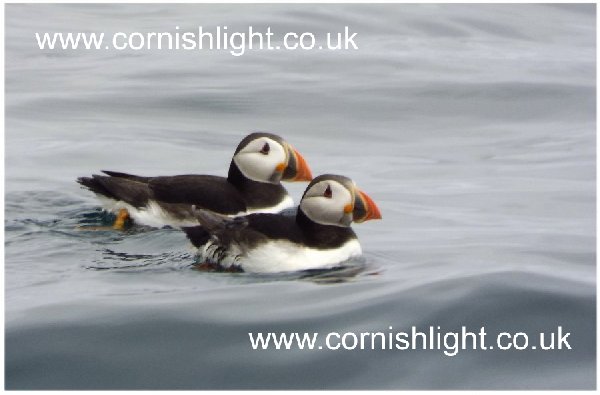 Sadly the puffin in Cornwall is in decline. A few pairs breed on Long Island near Boscastle and furthur along the north coast on the Rumps near Padstow , but you need binoculars to get a view. There are also puffins on the Scilly Islands- take a boat trip to Annet, one of the off islands, where a hundred or so pairs breed, and where these photographs of puffins were taken.

The fulmar has in the last 40 years spread right around the coast of Great Britain. In season breeding pairs can be seen around the cliffs of Bossiney Cove and Port Isaac, usually nesting a few feet below the cliff top. The young fulmar is a bundle of white fluff and so cute. If you could get near to the nest you would find yourself on the receiving end of a regurgitated foul smelling oil produced when they feel threatened.

Also choosing to nest on the precipitous cliffs of North Cornwall are guillemots and razorbills. Neither bird builds a nest, but each lay a single egg on to bare rock. A good place to flavour the hectic springtime activity of a Cornish seabird colony is from the coast path between Willapark and Bossinney, just north of Tintagel. Off shore are two rocks known as the Sisters, the breeding home of a large colony of razorbill and guillemot, you will need a telescope to see them, though if the wind is onshore you might just catch their delightful calls in the breeze. There are sometimes bird watching boat trips from Boscastle, where the above photograph of guillemots was taken. Though not breeding in Cornwall gannets are often seen off the headlands, particularly Cape Cornwall just up the coast from Lands End, or Porthcurno Bay. Mention must be made of the herring gull, which more often than not chooses to nest on the roofs of houses in the seaside towns and villages. 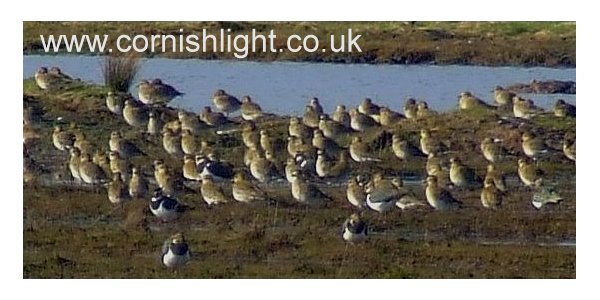 The Tamar, Looe River, Fal and Hayle estuaries are internationally important winter feeding grounds for several species of wader, including the curlew, redshank and dunlin. In exceptionally cold winters huge flocks of widgeon and knot are sometimes seen on the Hayle Estuary. The RSPB's Hayle Reserve hide, from where the image above was taken, overlooks the high spring tide roost of these winter visitors. Egret are resident all year, with a good chance of seeing several along Copperhouse Canal at low water anytime of year - where these photos were taken. Another good place to see egret is the Looe River- anywhere from the harbour again at low water to the upper tidal limit. There are several egret rookeries in the estuaries. 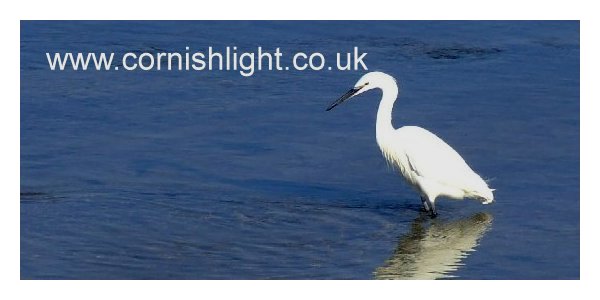 Nearby is Marazion Marsh another such important Reserve, where in winter at dusk you may be lucky and see huge numbers of starlings arriving for their nightly roost in the reed beds. 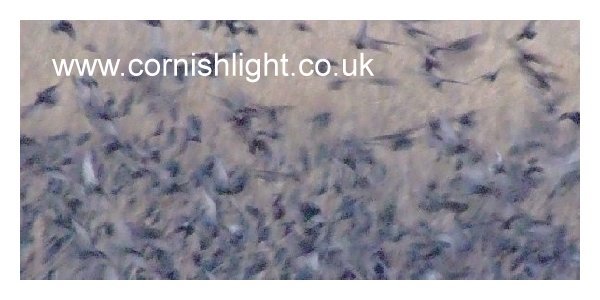 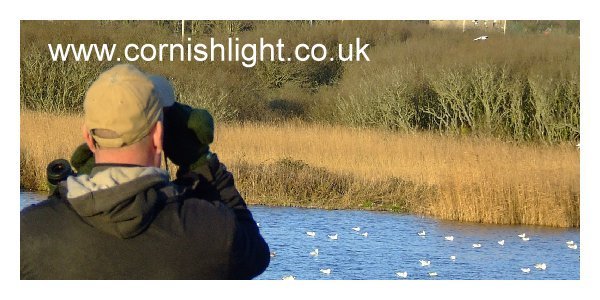 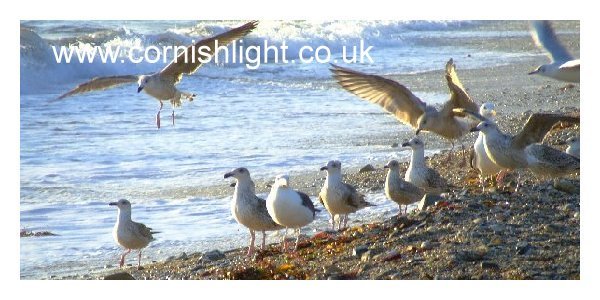 The Isles of Scilly

No page on birdlife is complete without another mention of this group of low lying Islands, warmed by the Gulf Stream,

only 28 miles off the tip of Lands End Cornwall. The Islands rising from an often crystal clear sea, golden beaches, hills covered with heath, rocks battered by winter storms. Well known for its spring and late autumn migrants, especially during October. Who knows you too maybe very very lucky and see a North American vagrant such as the yellow-bellied sapsucker.

On the mainland the Cornish Coast, particularly around West Cornwall from Lands End and Porthcurno, past Porthgwarra to Lands End and around to Cape Cornwall is also noted for the chances of seeing migrants, particularly in the sheltered valleys. Part of the delight is the unexpected, I fondly remember one early morning in late spring sitting amongst the heather clad slopes above Chapel Porth, when in the space of an hour dozens if not hundreds of swallows and martens past by all heading north. Just unforgettable.

Birds of the Countryside

The ancient oak woodlands of the Tamar Valley are the haunt of the raven, whose distinctive "croak croak" can be heard over long distances. If you are lucky you may see a Peregrine Falcon. These highly efficient predators are making a recovery after nearly a century of persecution, and are now breeding again both inland and along the coast. Other bids of prey you can expect to see include the common buzzard, kestrel and the smaller sparrow hawk.